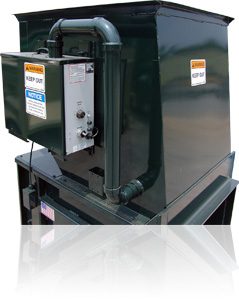 Offensive trash odor in a refuse storage or pickup area can be a negative reflection on your business or facility. In addition to the impact on the community, the odor creates an unpleasant work environment for employees and may cause complaints from neighbouring businesses and residents. Such complaints may result in violations and fines from the local health department. Most importantly, the odor can attract unwanted pests.

Unlike deodorant systems, which only mask odors, our Ozone Odor Control System actually destroys odors and the bacteria responsible for creating these odors.

Our system pumps ozone into the odor source of the waste compactor. For example, if your compactor is an RJ-250 Self-Contained Compactor / Container, ozone would be pumped from the remote Ozone Odor Control System through a hose with a “Y” fitting that leads to both the container and the compactor chamber. The best results are obtained when the ozone is pumped into enclosed areas. With the ozone pumped into these areas, the odor producing bacteria’s metabolism is increased to the extent that it is unable to survive. With the bacteria unable to carry on the decaying process responsible for the unpleasant gases, odor is eliminated. The odor molecules are converted to water vapor and other odorless, harmless gases.

The Ozone Odor Control System is available as an option in sizes proportional to your waste compaction application. 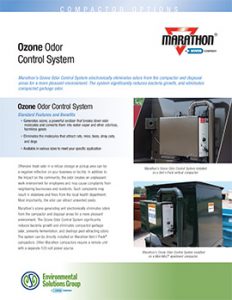 HAVE A QUESTION? NEED A QUOTE?

Get in touch with us today to speak with one of our representatives.

We partner with our customers to best manage and maintain their waste equipment through its entire life. We’re keeping an eye on it through our advanced iSmart IoT system, proactively maintaining the health of the equipment, ensuring productive and efficient operations.